This was a recent follow-up to a divisive Facebook post I posted a few weeks ago. I wrote this after experiencing the greatest part of the American experience: The raw absurdity of it all.

In recent weeks I may have posted out of frustration and the negative effects of reverse culture shock, and I may have tried to make amends, but I still feel kind of bad about what I might have said. Today, as I was out shopping for a car, I noticed something that made me laugh, and I thought to myself about how much I miss the absolute absurdity of living in other countries, and how much I love it. Being home, unemployed, and seriously stressed, I lost sight of one little fact: When it comes to the absurd, NO ONE has America beat (Korea comes damn close, though!).

Driving down the highway (I am still not sure of which one), heading toward the Great Lake Erie, we passed three consecutive sights — seriously, within a mile of each other.

The first was a casino. Casinos are apparently big business here in Pennsylvania now. I know Pittsburgh was debating putting some in when I left the U.S. and now they have them. My friend and I went to the one here in Erie about a week ago, just so I could get out of the house and see something wacky. They are not the classy casinos, like the two that I visited in Korea. The Lucky 7 near Samsung Station was my favorite, as the food and drinks are free as long as you are gaming, and I was with a great Black Jack coach during those visits. I never won much, but I always broke even and loaded up on free Peking Duck and G&Ts. I call that a win. The casinos here in PA are mostly slot machines, and it is a little depressing. I always wanted to show up at the Lucky 7 wearing a tux and an eye patch, then sit at the baccarat table stroking a fluffy white cat and eyeing the other gamblers with a paranoid suspicion. The PA casinos… I would just show up wearing a denim jacket and a mesh trucker’s hat and be depressed… but hey — it’s still a casino.

Just down the road from the Erie casino was a massive billboard: “Adult World!” A porn shop. I was traveling with a female friend, and she told me she frequents the place. She even showed me the discount card she carried in her purse that had the same logo as the billboard. I was impressed, but not by the fact that she went there. It’s easy for females to walk into those places. It makes women patrons seem bold and progressive. If we men walk in there, we are just sleazy perverts. I was impressed with the reminder that we have shops in the U.S. that deal explicitly in pornography and every conceivable plastic toy to appease every conceivable sexual addiction. Many countries have such shops (the ones in Europe are staggering, the ones in Korea are tame, in comparison). 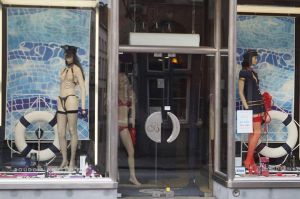 A sex shop in Brugge, Belgium (Photo by ME!)

Here in the U.S., these retailers are constantly trying to out-do each other on the shock scale, so the curious observer of all things freaky is guaranteed at least a chuckle at every entrance to one of these establishments — if one but has the nerve to park their car and walk through that door. I have done this. I will never forget, in my formative college years, going into such an establishment to purchase a bong (as in Pennsylvania at the time, these shops were also your go-to head shops). As the cashier rang up our new water-pipe, I noticed a businessman casually perusing the butt plugs. He was a diligent shopper, and was being very comparative. He wasn’t the sort to shuffle in off the street, head down, eyes averted, and quickly stuff just any old butt plug under his trench coat. No, this man was taking his time, and following Ralph Nader’s advice to read those labels! I do not know who he was, and he has no idea that I was watching him — nor did he care, God bless him — and I am certain that he got the best damn butt plug that retailer had in stock.

A short distance from the adult shop billboard was another massive billboard. It was very colorful — not sultry and purple-black like that of the sex shop — and exploded with four main words leaping off the board and into my eyes: FIREWORKS! KNIVES AND SWORDS! In case you want to stab, butcher, and decapitate something — and then blow it up with a festive light show.

I smiled, and said to my friend: Only in America. She asked what I was talking about (as most people do when I babble inanely). I said, “I have been in 23 different countries. I have lived in three. And of all of the beautiful absurdity of the human experience, only here — only in America — can I see something that blows the others away.” They try to emulate, but they cannot formulate, the wonderful combination of absurdities we manage here in the U.S., right in my home state.

Gambling, sex, swords, and explosives — all within two miles of each other, and all are designed to entertain on a scale that…well, POPS! It’s just fuckin’ VEGAS, and I am not even NEAR Vegas yet. There is no other word. You can’t beat it, and nor should anyone try. And if GSSE are not enough for you, I am certain if I drove another mile, I could find some kick-ass guns and a kick-ass liquor store. It may not be as convenient as Wal*Mart, but it is damn close, and damn more exciting.

And I may have told some of you that there is a strip club on the ride from Indiana PA to my beloved Pittsburgh — a strip club called the Beehive. And they have a DRIVE-THRU. I have never been — I have no idea what a “drive-thru” strip club offers, but you know what? Now I’m gonna try it. I have embraced and adored the absurdities of other countries and cultures. Now I am going to embrace those of my home country.

So watch out, you tawdry vixens of the Beehive Showbar on Route 22, somewhere outside Pittsburgh, Pennsylvania — because I just bought a car.

A classy joint, no?

Sex, swords, and explosives. And if you want booze and guns, we got those, too.

“Don’t you try to outweird me. I get stranger things than you free with my breakfast cereal.”  — Zaphod Beeblebrox, the Hitchhiker’s Guide to the Galaxy