I used to have a laundry list of fix-alls to try to restore the United States to its intended glory, but now I think that the simplest solution is the best place to start. Read on to learn what that is…

As I look at the news today, it strikes me how much the United States, my homeland, has wandered from the path of Truth and Justice. Amid the daily onslaught of huge news stories documenting the collapse of this once-great nation, I noticed two smaller stories just this week about child rapists being given slaps on the wrist, and how they were allowed to walk free with no jail time. Does the U.S. even see how Saudi Arabia it has become? Jean de La Fontaine once said, “A person often meets his destiny on the road he took to avoid it.” The United States, in its fervor to be whatever the hell its diverse population imagined it was supposed to be, seems to have veered wildly off course and is now a festering pustule of corruption, greed, and cruelty.

This president just signed a bill allowing mining companies to dump their waste into the U.S.’s waterways. The Environmental Protection Agency no longer regulates the dumping of industrial waste into those same water sources. The EPA, the education department, and the justice department are headed by people who represent the antithesis of the ideas those departments were put in place to uphold. We fund corrupt governments the world over, arm brutal dictators, support murderous regimes, all the while bombing and starving innocent people who just want to live their lives.

We abuse the world around us, contributing greatly to the corruption of the entire world, and at home we rob and abuse our own people at the behest and benefit of the wealthy corporate elite. The United States has become a pseudo-theocratic corporate oligarchy, and the corruption is killing everything — LITERALLY EVERYTHING. Our environmental policies (or lack thereof) alone are seeing to that, never mind our weapons and warfare policies.

I could go on and on, but if you are conscious in today’s world, you are already aware that the United States has, and is, a HUGE problem. I will lazily sum it up with one word: Greed. And just to show I am not totally lazy, I will add another word: Corruption.

Now, my answer to this huge problem of corruption and greed has long been a five-step plan. Keep in mind, I have no degree in political science, and I am generally an idiot, but this is what I would have done to try to fix the global disaster that is the United States:

Aside from all of that, I also support a flat tax and believe we need to enforce tougher laws, but that they need to be enforced equally, regardless of race, creed, or class. Congress should have to live by the same laws that they make for everyone else. If we don’t get free health care, then neither do they. And they can’t vote for their own salaries — the people should decide how much their representatives get paid. In the age of the internet and instantaneous communication, do we even NEED a Congress anymore? I’m sure it was a dandy idea back when remote populations needed to send some lackey across the continent on a horse, but come on. The idea of having to send an actual person to the nation’s capitol to voice our opinions is a bit obsolete, isn’t it?

However, if we insist on keeping a Congress, we must keep that Congress in line. No more privilege, no one gets special treatment. How many times have you read a news article stating that some corporate CEO or politician blatantly broke the law, and then they face NO punishment for it? Meanwhile, if a poor black woman steals some bread to feed her hungry child, she goes to prison for 15 years. The U.S. prison system is nothing but legalized slavery, and that is no exaggeration.

Anyone could write volumes on these and the seemingly countless other problems facing the U.S., so I will try to remain focused on my new solution. It is simple. It is elegant. It has historically proven to be effective. And it sends the right message. So here is my simple solution to fix the United States:

Bring back the guillotine. 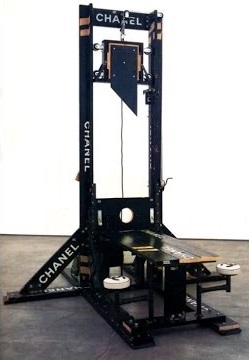 That’s it. Then we start at the top and work the laws all the way down. Starting at the top sets a new precedent, as making examples of the elite CEOs and politicians will show the American people that we mean business. Now if a politician or CEO is caught breaking the law, we don’t let them lawyer up and coddle them with back-room deals that allow them to avoid any and all prosecution. We send in the police, drag them out of their homes like a common meth dealer, walk them up to the guillotine and lop off their damned head live on television.

The guillotine is swift, humane, and packs a powerful image that will inspire the other criminals to toe the line. And it allows for the clean harvest of organs to be used for transplants in conjunction with our new and improved health care system, which is, of course, paid for by the $10 million a day we USED to give to Israel so they could bulldoze homes and torture Palestinian children. Now, instead of funding cruelty, we are providing new livers, kidneys, and hearts to sick children who need them.

I would love to see cretins like Mitch McConnell ask, “Why are you giving us all detailed physical exams?” and get the reply, “We’re checking your vital organs for transplant viability. When we take your head, there’s no sense in letting a perfectly good liver go to waste.” Not that any of them have viable organs anymore… but waste not, want not.

No more long, boring trials that allow the corrupt to slip unnoticed from the slow-moving hands of justice. No more pleading out and paying off the judges. If a judge takes a bribe, we take their head. The streets of every town in the U.S. will run red with the blood of the corrupt for a while, but then… then we’ll see some positive change, some REAL change for once. The headless death of the status quo. No more election year lies, no more of the wealthy being above the law. They will be below the blade, just like every other criminal that is found to be guilty.

So how do we decide what crimes are blade-worthy? Non-violent crimes will not earn one a trip to Le Rasoir National, so recreational drug users, for example, will get a pass. However, if the crime causes direct physical or psychological harm to others, then off with their heads! This means owners of pharmaceutical companies that make life-saving medications unaffordable to patients who need them to live will face La Monte-à-regret. Corporations poisoning the water supply of a town or city will see their CEO’s severed head rolling down the pavement. No exceptions!

Tell me you wouldn’t love to see this son of a bitch’s head rolling down the steps?

As I said, we start at the top: Congress. We pull up the deals of each and every state representative, and if their conduct violates the “Do No Harm” rule, then they don’t get to go home ever again. Their corrupt slack-jawed coconuts will adorn the Capitol steps. Then we’ll see some benefit in our system, by God! Then you’ll see their damned “trickle down” economy actually start to trickle down. If you are in Congress, you are a public servant. You either do your damned job and actually SERVE the public, or we SEVER your useless skull from the ol’ brain stem.

Politicians serving special interests over the interests of the populace? Chop.

Rapists themselves? CHOP CHOP (first the little head, then the big one).

We’ll have size-appropriate guillotines for that first chop.

CEOs making insane amounts of money at the expense of the weak, and keeping it all for themselves while their communities die? CHOP.

Democrat or Republican, rich or poor, if you knowingly hurt others, you die under the blade and your vital organs go to someone who might do some good with them. It may seem extreme, but I guarantee you, at this point it’s the only way to right this ship. Perhaps in a few generations, when decent behavior and a reverence for justice are deeply instilled in the collective psyche, we can retire the chopper. But right now, America needs some tough love.

That’s it. Bring back the guillotine. Think about it, America. Or continue to collapse into the Singularity of Suck you have become.

And let’s start with Mitch McConnell. We’ll test the guillotine on him first.